Whilst in past years I would’ve been nursing a hangover of sorts on New Year’s Day this year was different. Not because I don’t really go out anymore to see the New Year in as I do as a rule now spend that time with my wife and children but more to the point that I was more conscious of getting a good night’s sleep because of the impending Parkrun double taking place on New Year’s Day.

“Start the year as I mean to go on” was my thoughts as I was driving over to Huntingdon and Hinchingbrooke country park for part one of the double. This was still at the same start time of 9am and then after you finished you had to get in the car and over to Ferry Meadows in Peterborough for a 10:30am start to complete the double.

There was so many people that turned up for part one 310 runners in total. Quite a few “tourists” as they are referred to from Peterborough taking advantage of the staggered start times to also complete the double. I had arranged to meet a friend at the start line in Huntingdon but there was so many people milling about that it proved impossible. It was a great run, although the weather had been kind in terms of the frost easing off the course was still a challenge in certain parts. I crossed the line in 176/310 place in a time of 27:56 and only 39secs off my course PB ( Ha! Only! ). Having completed part one as soon as my barcode was scanned I headed off to the car to make it to Peterborough for part two of the double.

I had never attended the Peterborough Parkrun before and I to that end had never even been to Ferry Meadows. I followed my nose and actually lucked out in finding it relatively easy. As I parked the car I spotted my friend getting out of her car and it turns out she was at Huntingdon as well and had the same issues trying to find me. Well we had both made it to part 2 so we headed off down to the start line where I was one of a whopping 511 runners taking part. It was massively congested at the start and I don’t think I crossed the start line until 20secs or so after the race was underway. Unfortunately its only gun time that counts here and so that time would have to be made up if possible. The course itself could not be more different from Huntingdon if it tried. It was all on pavement ( a refreshing change of late) and mostly a very quick and flat course as it speeds twice around the lake. As the runners thinned out I could start to get an even pace going and I eventually crossed the line in 28:08 in 285/511 Place. I really would like to come back and have a go at this Parkrun again when there is less people on the start line and I haven’t already run 5k 30mins prior as I think it could be a very quick course to register a decent 5k Parkrun time.

Xmas came a few days early for me this year as I waited in for my parcel from sportsshoes.com. I had treated myself to a Garmin Forerunner 220 and some new trail shoes. I know that it should have been put away for xmas day but I couldn’t help myself and I just needed to check them out.

The GPS watch was something that I had wanted for some time and have been saving up for. I am really hoping that I can get the best from it as I always seem to struggle with pacing myself correctly. It will also come in really useful when I start going to track nights next year. It has loads of features that I will try out and after I have used it a few times I will look to post my thoughts and review the product a little more. Right now I’m just excited to get out there and try it.

I also wanted to invest in some trail shoes after the last frostbite and some of these winter park runs have also led me to believe that I need more in the way of grip when running certain courses. I opted to stick with ASICS due to the comfort I am getting from my GT 2000’s. So I purchased the FUJI TRABUCO 3 TRAIL running shoes and the fact that they support my over-pronation in the same way my GT 2000’s do it was a massive bonus. 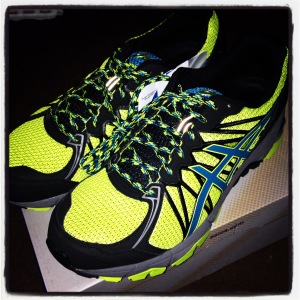 So with new toys to try out I needed a plan. Well this was easy, you see as I was busy on Sunday I unfortunately missed out on the clubs annual Santa run around Grafham Water. And whilst that course was very tough for me last time out (albeit was in pitch black darkness) I was disappointed to of not gone and had another go at it in the light of the day. Well I wasn’t deterred and after making arrangements with a work colleague to accompany me I set off for a Monday lunchtime run around Grafham Water myself. A perfect way to road test my new toys.

It was such a different run in the light, beautiful and very picturesque in places. The course itself was still challenging even though I could see where I was going this time. At times especially when the undulating hills become visible I was somehow thinking it was better not seeing them as the mental aspect of having to run up them was harder than when I didn’t’ know they were there…

I really enjoyed the run and the watch was great, even though I found myself running and staring at my wrist for large portions of the time. I was impressed with my shoes also, as we all know that you are supposed to break them in gently, but after 9 miles I never had one blister or sore. Top running comfort and another win for gait analysis and the correct footwear. 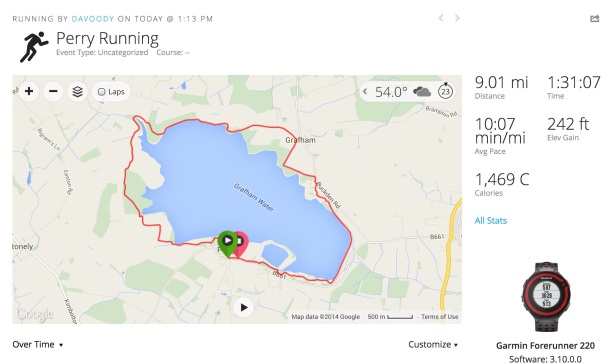